A Detailed History of the Mid-Peninsula Recorder Orchestra

In the spring of 1962 Ampex engineer William Barnhart invited some of his fellow recorder players to a day of music making in the woods of Huddart Park.  About one hundred and fifty people showed up.  Encouraged by this turnout, Bill decided to form an ensemble in the Palo Alto area devoted to exploring the musical repertoire for recorders and other early instruments.  The first meeting of this ensemble took place in the fall of 1962, and the Mid-Peninsula recorder Orchestra was born.

When Bill Barnhart left the Bay Area in 1967, Angela Owen took over as Music Director and President from 1967 until 1987.  A Board of Directors was established and the orchestra developed close ties with the Palo Alto Division of Arts and Culture, giving annual performances under the city's auspices at the Palo Alto Cultural Center.

From its inception the orchestra hs had close ties with Stanford University, the City of Palo Alto and the surrounding communities, first through the pioneering effors and leadership of Bill Barnhart and his wife, Ilse, and then under the very capable direction and organization of Angela Owen.  During its early years the orchestra appeared on Public Television station KQED, performed at the Palace of the Legion of Honor, gave several concerts in collaboration with the City of Palo Alto, and presented workshops directed by LaNoue Davenport, Friedrich von Huene, Hans Ulrich Staeps and George Houle.  The orchestra has also commissioned or presented premiere performances of works by several local composers and has appeared regularly at local community centers.

Frederic Palmer, who has served as music director since 1988, has continued the orchestra's tradition of close ties with the community, regular public performances and promoting new ensemble music for the recorder.  During this time the orchestra has presented performances with the Palo Alto Unitarian Church Choir, has featured Susan Witt of the San Francisco Opera Chorus as soloist in a work by Palo Alto composer Nancy Bloomer Deussen, has performed at Mission San Jose with the California State University, Hayward Oratorio Society, and has offered workshops directed by Marilyn Boneau, Gloria Ramsey, Ken Johnson, and John Tyson.

In 1994, Under the leadership of then MPRO Board President Diana Fischer, the MPRO applied for and received affiliate status with the San Francisco Early Music Society (SFEMS).  This move not only provided for greater exposure of the orchestra to the Early Music community of the Bay Area, but also allowed for adoption of non-profit status thru SFEMS.

The orchestra continues to have close ties both with SFEMS, and more recently the American Recorder Society (ARS).  In June 1999 the orchestra was invited to perform at the Berkeley Early Music Festival, as the featured entertainment for the reception given by the American Recorder Society.  In July of 1999 the Mid-Peninsula Recorder Orchestra became an official ARS Consort.  The 1999 season also saw the world permiere of an original piece of music composed for the MPRO by Mari Canfield-Kermit, entitled Aboriginal Wind, at the orchestra's Spring Concert. 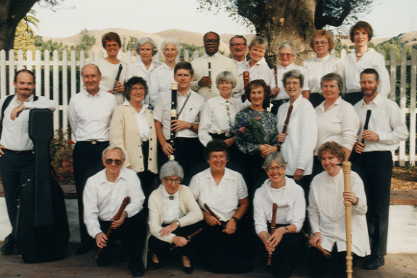 MPRO Workshops Over the Years